Mari Petroleum Company Limited (MARI) netted healthy profits in the first quarter of the ongoing fiscal year (1QFY23), registering a 5% increase year-on-year. MARI has been ranked third among the oil and gas exploration companies listed on the Pakistan Stock Exchange (PSX) based on its market capitalisation. Primarily engaged in the business of exploration and production of hydrocarbons, the current market value of MARI is around R30 billion.

The company reported an increase in net profit after taxation and earnings per share (EPS) in its interim financial statements for 1QFY23.

During the first quarter of FY23, MARI saw its share price go down from Rs1,746.82 to Rs1,564.81. During the period under review, the highest value of market share hit on July 14, 2022 with the value of Rs1,770.29. Whereas the lowest held share value was Rs1,540.80. From the trend analysis in 1QFY23, the share price of MARI seems sensitive. Declining trend in the share price is not continuous. Rapid revivals can be seen after a short period of value dips. Overall, MARI lost Rs182.01 a share. 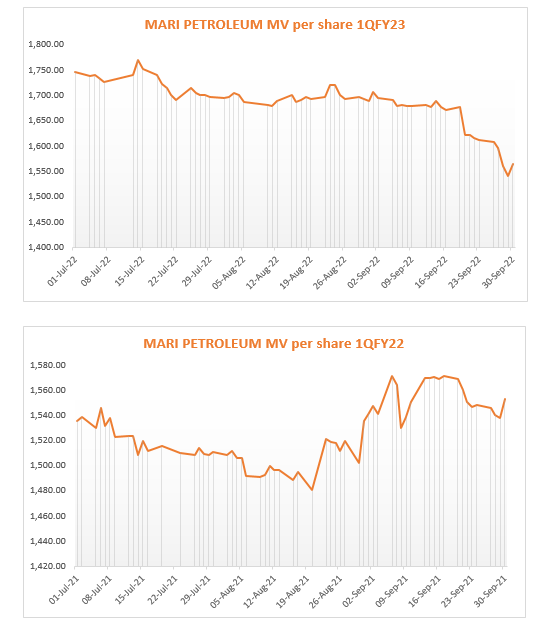 In nutshell, MARI had a slightly improved picture overall in 1QFY23. In comparison to the same quarter of FY22, short-term fluctuations in stock price are lesser than in 1QFY23. However, in the longer run, declining trend has ruled and company stock prices also showed irregular ups and downs. From the preceding quarter, profits and the EPS went up in value in 1QFY23.

Pakistan succeeds in reducing trade deficit in services by 83%

President for insurance to guard farmers against crop losses