The Pakistan Stock Exchange (PSX) turned bearish last week owing to concerns among investors regarding political uncertainty and continuous hammering of the Pakistani rupee against the US dollar, WealthPK reports.

The reserves of the State Bank of Pakistan (SBP) dipped to $8.346 billion last week, putting further pressure on the Pakistani rupee, which continued to weaken against the greenback and settled at Rs239.65.

Furthermore, the Gross Domestic Product (GDP) growth rate is likely to go down to 2% during the current fiscal as the government has estimated that the flood damage and reconstruction efforts may cost $30 billion. The market remained lackluster during the last week.

The PSX recorded a dull session again on September 19 due to late-session selling. Bulls attempted to show some strength earlier in the session, however, they failed to muster enough traction and succumbed to nervousness. As a result, the KSE-100 index dropped 92.6 points and closed at 41,679.49 points.

Another range-bound session was witnessed at PSX on September 21 owing to concerns among investors regarding political uncertainty and continuous hammering of the Pakistani rupee against the US dollar. As a result, the KSE-100 index finished dropped 255.33 points and closed at 40,965.58 points.

The 100-index of the PSX witnessed a bearish trend on September 23 amid worsening macroeconomic conditions and a lack of stability despite the revival International Monetary Fund loan programme for Pakistan. As a result, the KSE-100 index finished the day with a drop of 307.74 points and closed at 40,620.21 ponits. 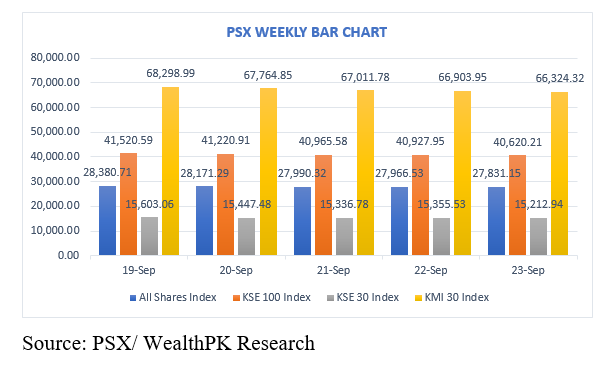 By selling its shares last week, the Foreign Investors Portfolio Investment (FIPI) made a profit of up to $5.09 million. Insurance companies made most money last week by selling their shares for $3.32 million, followed by Foreign Corporates with $3.03 million and Mutual Funds with $2.42 million. Foreign individuals purchased up to $6.92 million in shares, followed by individuals, who purchased $1.52 million in stock. Banks purchased up to $1.45 million worth of stock.

Jawed Abdul Ghaffar, a financial analyst, said that he was expecting the market to remain range-bound in the upcoming week amid concerns over the depreciation of the Pakistani rupee and inflation. He said that a high inflation rate increased production costs, resulting in a reduction in exports.

“We recommend that the investors cherry-pick the scrips because we expect the market to be positive next week,” Ghaffar told WealthPK.